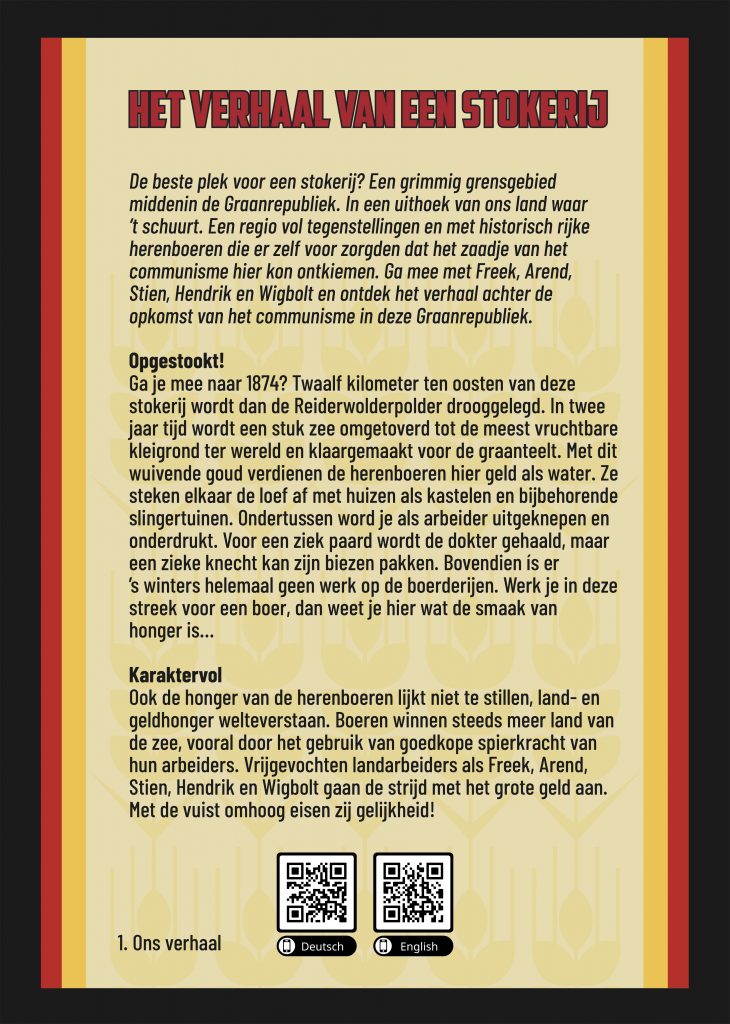 1. The history of a distillery

The best place for a distillery?
A forbidding border area at the centre of the Graanrepubliek (Grain Republic). In a corner of the Netherlands where the climate is grim. A region of contradictions and with historically well-to-do gentleman farmers who ensured the seed of communism could germinate here. Join Freek, Arend, Stien, Hendrik and Wigbolt and discover the story behind the rise of communism in this Grain Republic.

Not to be stilled!

Let’s travel back in time to 1874.
It was then that the Reiderwolderpolder was drained twelve kilometres east of this distillery. In two short years part of the sea was transformed into the most fertile clay soil in the world and prepared for the cultivation of grain. The swaying gold makes the gentleman farmers incredibly wealthy. They try to outdo each other with their castlesque homes and meandering gardens. While the workers are exploited and oppressed. If a horse gets sick the vet is called, but a sick servant gets the boot. And there’s no work at all on the farms during winter. If you’re working for a farmer in this area you know the true meaning of hunger.

The gentleman farmers’ appetite also seems insatiable; their appetite for land and money that is. Farmers reclaim more and more land from the sea, mainly with the cheap labour from their workers. Emancipated land labourers like Freek, Arend, Stien, Hendrik and Wigbolt start the battle against Big Money. With their fists raised they demand equality! 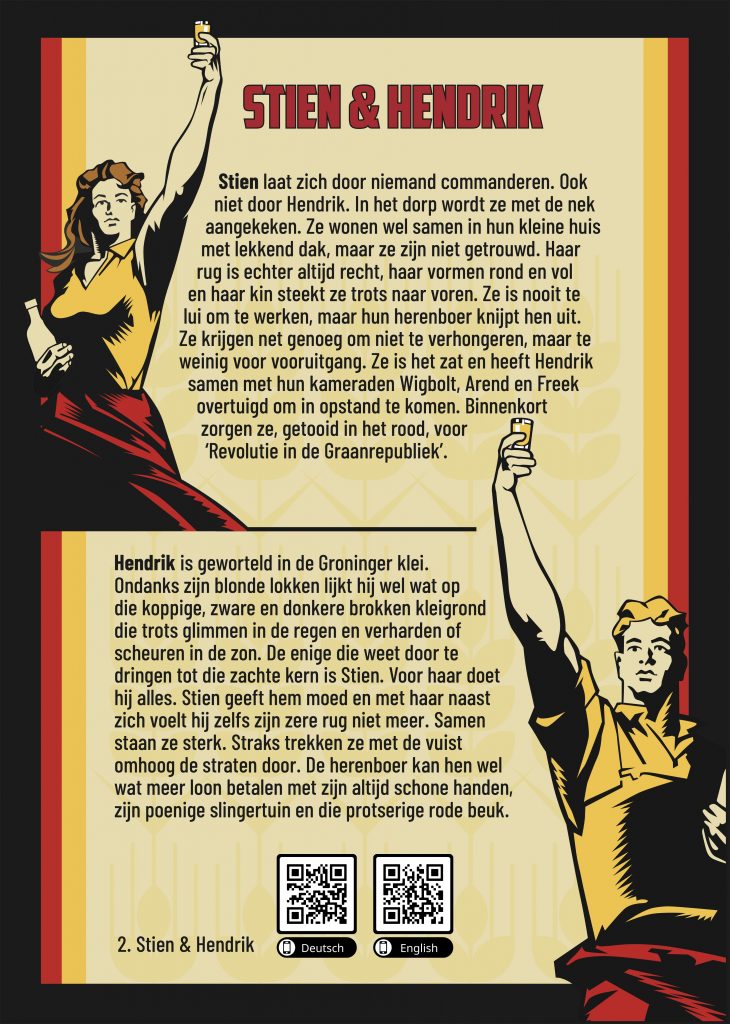 2. Stien doesn’t let anyone boss her around. Not even Hendrik. She gets the cold shoulder in the village. They live together in their tiny house with a leaky roof though they’re not married. She has a buxom figure and always walks tall and proud with her head high. She’s never afraid of hard work, but their gentleman farmer exploits them. They earn just enough not to starve but too little to get ahead. She’s fed up and has convinced Hendrik and their friends Wigbolt, Arend and Freek to revolt. Dressed in red they are about to start a ‘Revolution in the Grain Republic’

Hendrik is born out of the Groninger clay. Despite his blonde hair he somewhat resembles those stubborn, dark, heavy lumps of clay that shine proudly in the rain and harden or split in the sunshine. The only one who knows how to appeal to his soft heart is Stien. He would do anything for her. Stien gives him courage and with her by his side he doesn’t even feel his sore back any more. Together they are strong. Soon they’ll march through the streets with their fists raised high. The gentleman farmer is certainly able to pay them a bit more with his ever-clean hands, his boastful meandering garden and that flashy purple beech. 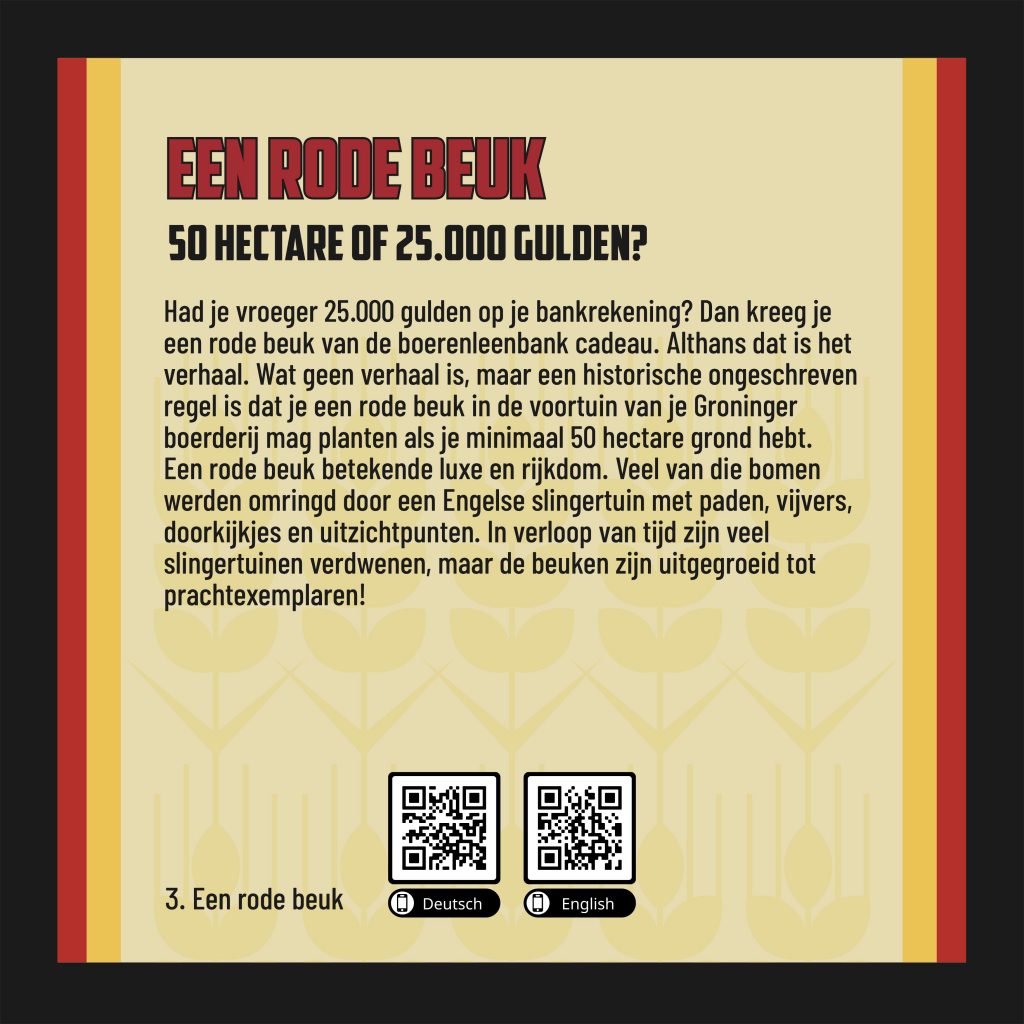 Before, if you had 25,000 guilders in your bank account the farmers bank gave you a purple beech as a present. Or so they say. What isn’t hearsay but rather a historical unwritten rule, is that you were allowed to plant a purple beech in the front garden of your Groninger farm if you owned more than 50 hectares of land. A purple beech represented luxury and wealth. Many of those trees were surrounded by meandering English gardens with paths, ponds, vistas and outlook points. Many of these gardens have disappeared over the years, but the beeches have grown bigger and more majestic! 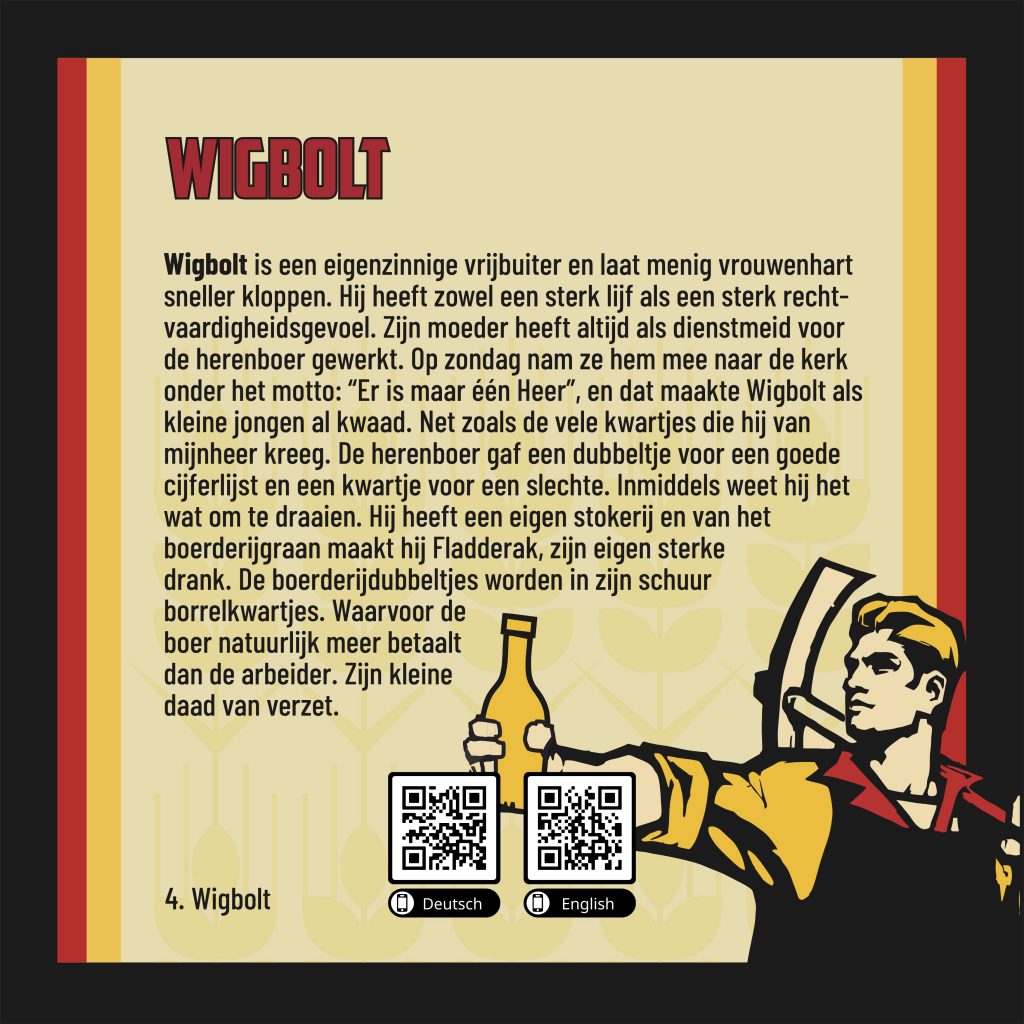 4. Wigbolt is a strongheaded adventurer who has a way with the ladies. He has a strong body as well as a strong sense of justice. His mother always worked as a maid for the gentleman farmer. On Sundays she would take him to church, saying: “There is only one Lord”, which infuriated Wigbolt already as a child. Just like the many quarters he received from sir. The gentleman farmer would give him a dime for a good report card and a quarter for a bad one. By now he’s gained some new perspective. He has his own distillery and he uses the farm’s grain to make Fladderak, his own spirit. In his shed the farmer’s dimes are turned into drinking quarters. Which the farmer has to pay more for than the labourers, of course. His small act of resistance. 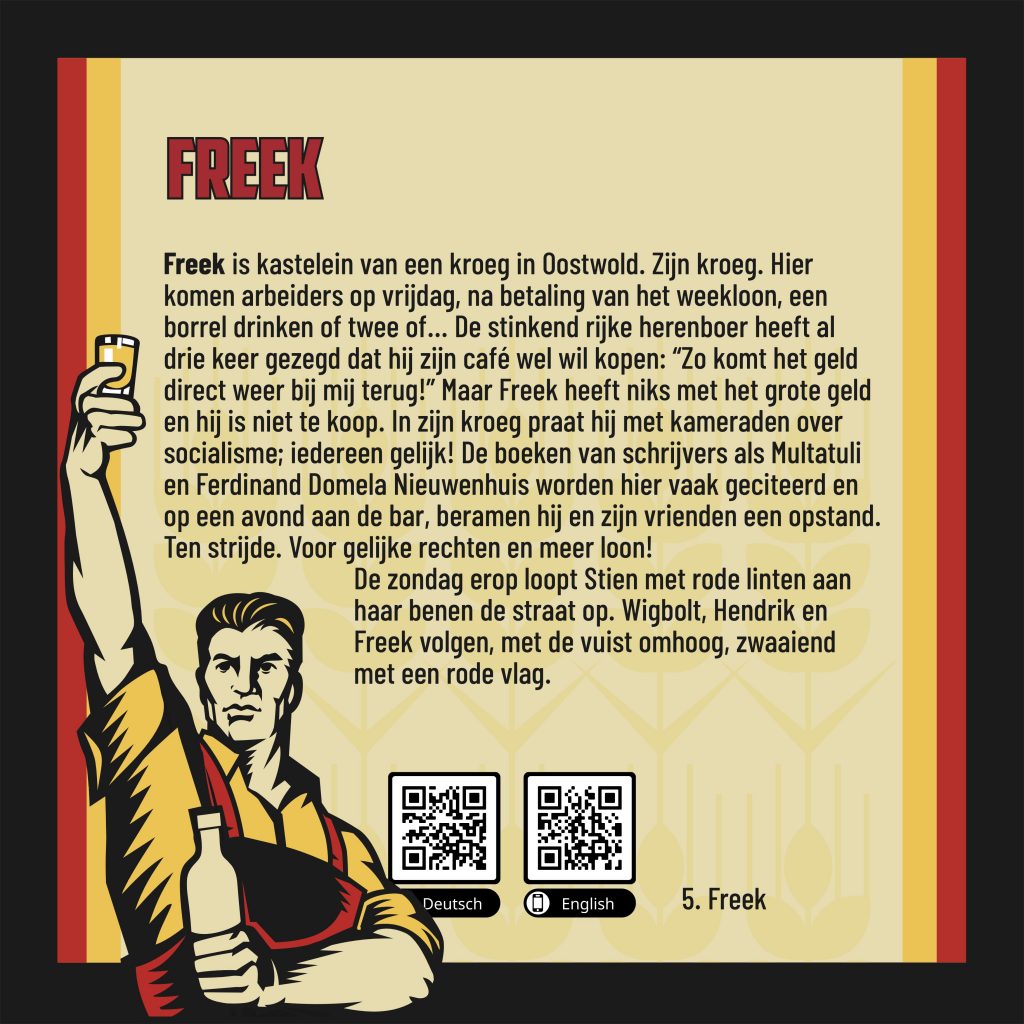 5. Freek is the landlord of a pub in Oostwold. His pub. On Fridays, after getting their weekly wages, the labourers come here for a drink or two or… The filthy rich gentleman farmer has already offered to buy his pub three times. “That way the money comes directly back to me!” But Freek isn’t tempted by money and he won’t be bought. In his pub he talks with friends about socialism; equality for all! The books by writers like Multatuli and Ferdinand Domela Nieuwenhuis are often quoted here and one evening at the bar, he and his friends plan a revolt. To arms. For equal rights and higher wages! The next Sunday Stien walks out into the street with red ribbons tied around her legs. Wigbolt, Hendrik and Freek follow with their fists raised and waving a red flag. 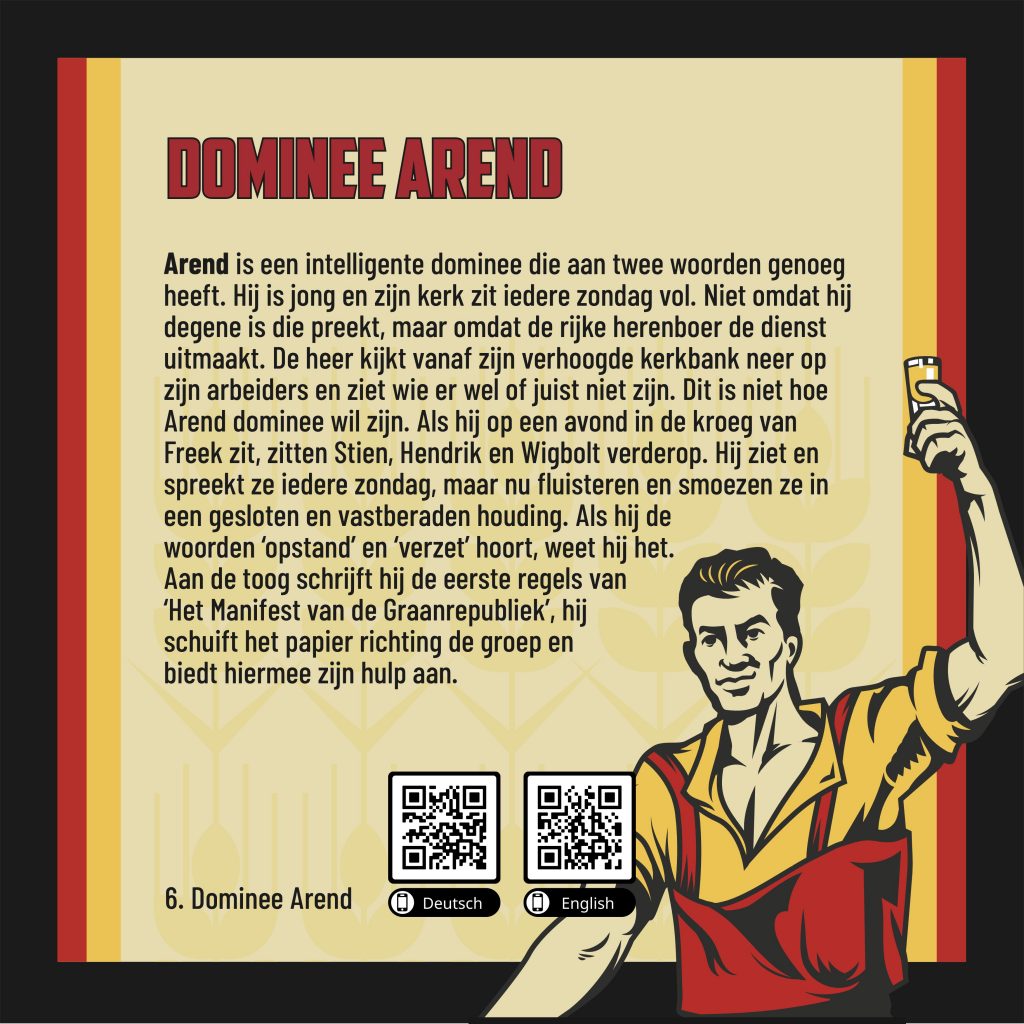 6. Arend is a smart minister who’s quick to understand things. He’s young and his church is always full on Sundays. Not because he’s preaching, but because it’s the rich gentleman farmers who pull the strings. From his raised pew the farmer looks down on his labourers, noting who’s present and who’s not. This is not how Arend wants to be a minister. One night when he’s at Freek’s pub he notices Stien, Hendrik and Wigbolt sitting there too. He sees them and talks to them every Sunday but now they’re whispering, acting secretive and determined. When he overhears the words ‘revolution’ and ‘resistance’, he knows what’s going on. At the bar he writes the first lines of the ‘Manifest of the Grain Republic’ and slides the paper over to the group, thereby offering his support. 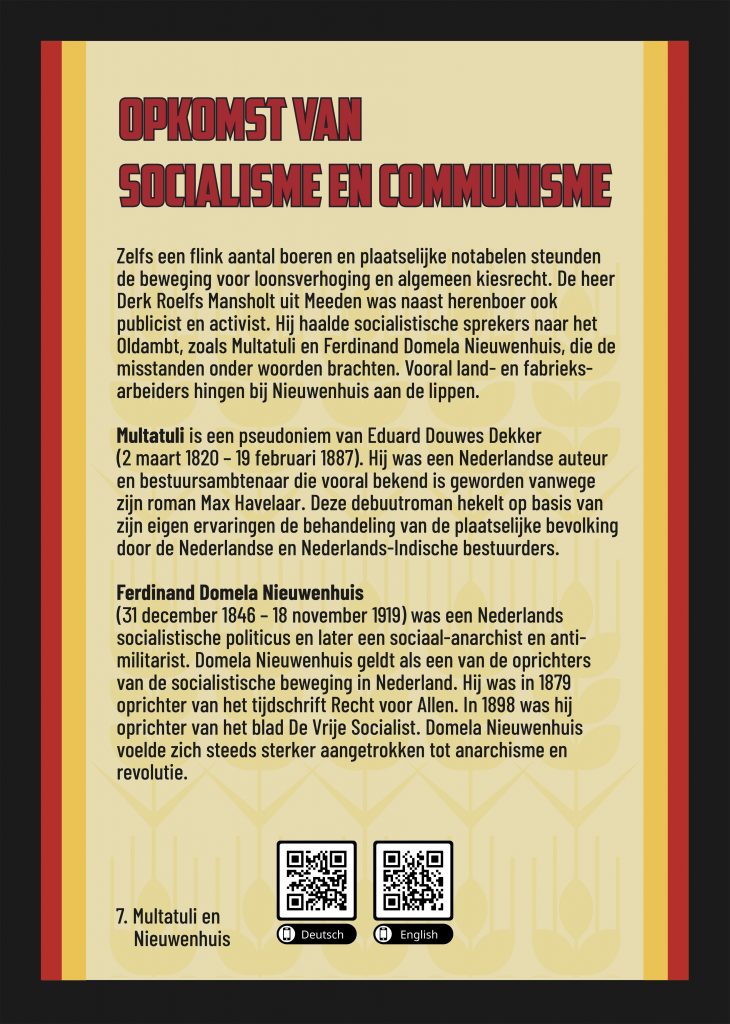 Even a substantial number of farmers and local dignitaries supported the movement for higher wages and universal voting rights. Mr Derk Roelfs Mansholt from Meeden was, in addition to being a gentleman farmer, also a publicist and activist. He invited socialist speakers like Multatuli and Ferdinand Domela Nieuwenhuis, who verbalised the wrongdoings, to the Oldambt. Land labourers and factory workers in particular listened closely to every word Nieuwenhuis spoke.

Multatuli is Eduard Douwes Dekker’s pseudonym (2 March 1820 – 19 February 1887). He was a Dutch author and government official who gained fame with his novel Max Havelaar. This literary début uses his own experiences as a basis to criticise the treatment of locals by the Dutch and Dutch-Indian officials. 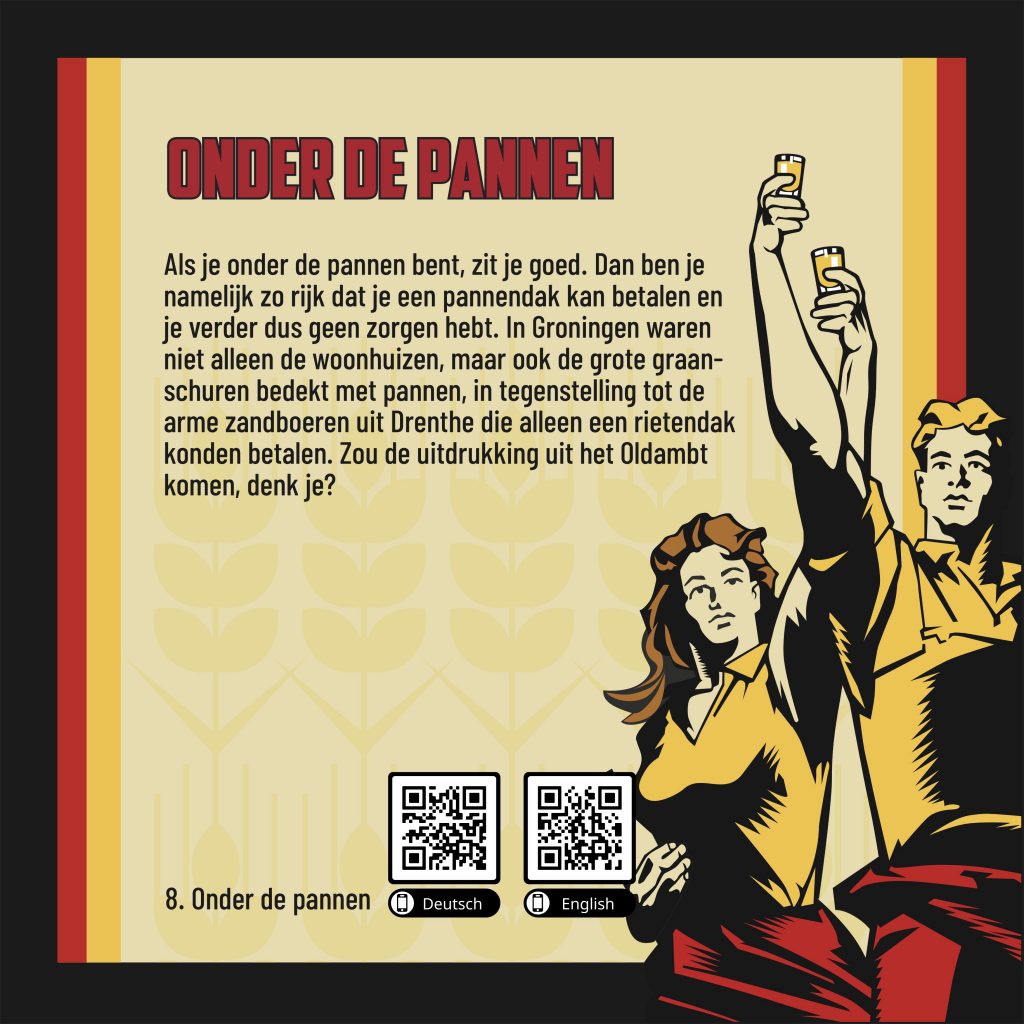 According to a Dutch saying, when you’re “under the tiles”, you’re doing OK. Because it means you’re rich enough to afford a tiled roof so you don’t have anything to worry about. In Groningen not only the houses, but also the large granaries, were covered with tiles, in contrast to those poor sand farmers from Drenthe who could only afford a thatched roof. Did this expression originate in the Oldambt, do you think?